Carbon monoxide (CO) is a colorless, odorless, poisonous gas that forms from incomplete combustion of fuels, such as natural or liquefied petroleum gas, oil, wood or coal.

When CO is inhaled, it displaces the oxygen that would ordinarily bind with hemoglobin, a process the effectively suffocates the body. CO can poison slowly over a period of several hours, even in low concentrations. Sensitive organs, such as the brain, heart and lungs, suffer the most from a lack of oxygen.

High concentrations of carbon monoxide can kill in less than five minutes. At low concentrations, it will require a longer period to affect the body. Exceeding the EPA concentration of 9 parts per million (ppm) for more than eight hours may have adverse health affects. The limit of CO exposure for healthy workers, as prescribed by the U.S. Occupational Health and Safety Administration, is 50 ppm.

Any fuel-burning appliances which are malfunctioning or improperly installed can be a source of CO, such as: 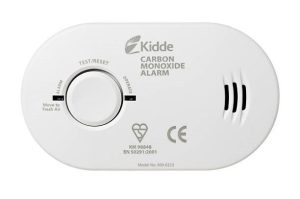 CO detectors can monitor exposure levels, but do not place them:

In North America, some national, state and local municipalities require installation of CO detectors in new and existing homes, as well as commercial businesses, among them:  Illinois, Massachusetts, Minnesota, New Jersey, Vermont and New York City, and the Canadian province of Ontario. Installers are encouraged to check with their local municipality to determine what specific requirements have been enacted in their jurisdiction.

In summary, carbon monoxide is a dangerous poison that can be created by various household appliances. CO detectors must be placed strategically throughout the home or business in order to alert occupants of high levels of the gas.